Muslim Reaction to the Cartoons 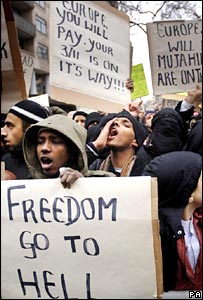 One significant belief of Islam precludes any drawing or image of the prophet Muhammad. When newspapers in Denmark published a series of cartoons caricaturing the prophet Muhammad - including one of the Prophet wearing a turban in the shape of a bomb -- and then were reprinted in other European papers, it set off a bomb of reaction that is continuing to reverberate around the world. The reaction to the cartoons, among most Muslims, has been one of outrage; among some, of actual violence.

The point which critics of Islam make is that because there is no separation of church and state anywhere in the Muslim world, there is, therefore, a fatal conflict between the religion of Islam and the adoption of democratic, pluralistic ideals and practices. This may be an arguable point, but it is a troubling one we all grapple with when we witness Islamic governments trying to develop semblances of democratic processes (in Iraq, in Afghanistan, in the Palestinian territories) while being held strictly to Islamic interpretations of law. Holding elections, alone, does not a democracy make.

The violent reactions also reveal a male-dominated response that is a microcosm of one of the largest problems besetting the Moslem world -- tens of millions of unemployed, underemployed, uneducated, and undereducated males in religious societies which define the male's hegemony as complete and unchallenged. These young men (and most of them are young) live in or come from nation-states where Islam is the religion of the state, where government laws and government actions are defined only insofar as they adhere to religious law, and where men dominate in every sphere of society. A poisonous form of Islamist fundamentalism has taken hold in many of these societies, a fundamentalism which is drowning out more moderate Muslims.

In what is, perhaps, one of the most telling pictures of the reaction to the cartoons, a young Muslim man at a London demonstration holds a sign that says: "Freedom Go to Hell." That one sign just might encapsulate the problem. There he is, living in a pluralistic, liberal democracy and he condemns freedom. Is it perhaps that his idea of freedom is different from ours? Another sign says: "Europe You Will Pay, Your 3/11 is On Its Way." Insult our religion, and you will die.

It is good that spokesmen for Islamic organizations are speaking out against these kinds of radical statements, but just how deep do these sentiments actually go among Muslims in general? There is, in fact, a deep well of resentment against the West, reflected clearly in the shallow sympathy for 9/11 and 3/11.

America's so-called war on terror has contributed substantially to this Muslim view. It has hardened opinions in the Muslim world against us. To many of them, the war on terror consists of a war on Muslims, exclusively fought in Muslim countries. Significant portions of the Arab media characterize America's response as a crusade, further contributing to this viewpoint.

It should be noted, however, that the Muslim reaction to secularism and liberalism long pre-dates 9/11 and the American invasions of Iraq and Afghanistan. In fact, attacks on secularism and liberalism within the Muslim world itself have been persistent -- Salman Rushdie condemned for his novel The Satanic Verses; Egyptian Nobel Prize winner Naguib Mahfouz almost killed for allegedly insulting Islam in one of his novels; and Farag Fouda, another Egyptian writer, assassinated for his warnings about the Taliban and Al-Queda. There are many, many examples of Muslims speaking out against Islamic fundamentalism and being assassinated or repressed.

Muslim fundamentalism in the Middle East is on the rise. The oppression of Islam by Western ideals and armies (and cartoons) is fueling this surge of reaction, in Iraq, Iran, Palestine, Syria, and other parts of the Muslim world. In the New York Times on February 4, Michael Slackman writes: "...with President Mahmoud Ahmadinejad bashing the United States and Europe, calling for Israel to be wiped off the map and claiming that the Holocaust is a myth, many people from taxi drivers in Morocco to street sweepers in Cairo are saying that they like the man and his vision."

Maybe the most telling question about this entire controversy was asked by Jihad Momami, the Jordanian editor who was arrested for violating Jordanian law (which is consistent with Islamic law) by publishing one of the cartoons in his weekly paper Shihan:

"Muslims of the world be reasonable...What brings more prejudice against Islam, these caricatures, or pictures of a hostage-taker slashing the throat of his victim in front of the cameras or a suicide bomber who blows himself up during a wedding ceremony in Amman?"

Fundamentalist Islam is framing this battle with the West and, so far, winning. For all the protestations of George Bush to the contrary, our interventions, our "freedom," our democracy, our cartoons -- these are daggers to the heart of fundamentalist Islam.

You can read here a Declaration of the Rights of Women in Islamic Societies.

If you want to read more about secularism among Islamic writers, here's an essay Ghassan F. Abdullah.

What's disturbing to me is the number of people in the liberal blogosphere who seem to be engaging in moral equivalency for the rioters.

On this topic, I won't budge. In democratic societies, we will allow free speech, and religious sensibilities be damned.

Fundamentalist Islam is framing this battle with the West and, so far, winning. For all the protestations of George Bush to the contrary, our interventions, our "freedom," our democracy, our cartoons -- these are daggers to the heart of fundamentalist Islam.

Stephen, that was an excellent post, but on this last point I have to disagree, or at least point out that it's not quite complete.

Islam is framing this battle with the willing assistance of governments in the West. I don't for a second believe that Bu$hCo doesn't have depiction and encouragement of the radical Islamist in mind when it formulates policy.

Kvatch -- I think you and I are saying the same thing except in different ways. My inference is that while the Bush Administration talks about its democratization in Iraq, for instance, it knows that democratization is window dressing for its real purposes which are related to oil, strategic positioning, and anti-Islamic activities.

It is a terrible situation concerning the violent reaction of Muslims to the cartoons depicting Mohammed.
It illustrates there is a tremendous gulf of misunderstanding between our cultures, and I would say that is true around the world.
I don't condone or support the rioting and I support our freedoms of expression but I am reminded of an old poem I learned years ago while learning to drive.
"Here is the grave of Mike O'Day.
He died defending his right of way.
His right was clear, his will was strong
But he's just as dead as if he was wrong!"
The word is, use a little caution when dealing with these societies.
We cannot force them into the 21st century and is "democracy" really the answer in these nations at this juncture? If democracy is the answer, what is the question?
I guess if I had an answer I would contact the state department immediately!

"millions of unemployed, underemployed, uneducated, and undereducated males in religious societies which define the male's hegemony as complete and unchallenged."

Sounds like you could be talking about parts of the Bible Belt, too...

As one who is a hardcore secular humanist, I find this all so very disturbing. In a perfect world, we would take the gloves off in regards to religious belief dictating public policy. Wanna pass a law based on some sort of religious belief as opposed to evidence? Prove it.

Whether it be because of politcal correctness or the deeply ingrained human religious impulse, we seem to give wide latitude to letting irrational superstitious beliefs(usually involving the Big 3 religions) a pass when it comes to calling them out on it, yet if we tried to pass a law based on informaton derived from astrology or reading goat entrails, there's no way it would fly. I don't see a difference here. I know my viewpoint is a minority one. I know, it sounds like I'm calling for another 'culture war'. We already have too many of those, unfortunately.

We can go on and on about respecting one's culture, not understanding the Muslim world, etc, but what if that culture is so obviously wrong, such as fundamentalist culture is? Where do we draw the line between respect and calling out idiocy when we see it?

As I understand it, Muslims in Europe are feeling the frustrations that they cannot practice all of their traditions while living in Europe (esp. regading women and such). Tough shit. If it's that big of a deal, they should reconsider whether they should want to live there in the first place. Europe should be moving forward, not backwards(us Americans are doing a fine job of going backwards).

Lest anyone accuse me of being hopelessly intolerant, this is not Muslim exclusive. I feel the same whether they be Christian, Jewish, Buddhist, Hindu, whatever. It just sounds harsh because I am sick and tired of the irrational ruining it for the rest of us.

Surfing around the blogosphere, I found a blog that is topic worthy:
http://face-of-muhammed.blogspot.com/.

Read his entry called 'Please leave.' How do you all feel about that?

I do think we have to defend freedom of speech and condemn violence as our primary priorities. However, I also want to point out two things which I haven't seen stressed much in the press:

1) If you pay attention to the original purpose and context of the publication of those cartoons, it was with the intent to push buttons. The protests can be understood better as a response to the "f--- you" intent of the original publication rather than to the bare fact of their being forbidden images. It's like road rage. Completely out of proportion, but based on an accurate and instinctive understanding of the other party's motives.

2) An attempt could be made to distinguish between forms of protest that we in the West are supposed to consider valid (boycott, peaceful assembly) and violence. Why not make a point of defending the freedom of speech of peaceful protestors too?

Islam treats men and Women In Islam as one, yet they are dissimilar. Based on biological, physical appearance & psychological presence each has been allotted certain roles in the society. Considering the aspects of each creation both have their degree of contribution in leading marital/personal life.